Menu
Log in
Register
Install the app
You are using an out of date browser. It may not display this or other websites correctly.
You should upgrade or use an alternative browser.

I made a 3D 360° Product view and want to put the client Logo on top as "As content only in fixed position on load" on the top of the view with a white background.
In the normal view everything is ok but the logo doesn't scale if I am in fullscreen. It has still the width at beginning.
If i say max with is 2000 it starts with 2000 in the normal view.
I don't know what to do.
Cheerz
Jens 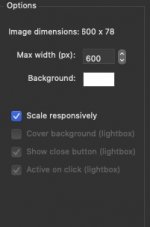 Hi Jens, I'm just going to paste here what we discussed on livechat.

The max width in the screenshot controls the width in the normal view. When you scale up via full-screen, we can't blow up the image any further as it would become blurred. It's the same result one would get by opening some website in full-screen via F11 in Chrome (on Windows).

We will be adding "profiles" feature in the coming releases that will allow having separate set of settings for different modes, including full-screen which will help with this. For the time being and like you have suggested on livechat, using the watermarks feature in SpotEditor accomplishes the needed result
You must log in or register to reply here.
Share:
Facebook Twitter Reddit Pinterest Tumblr WhatsApp Email Share Link
Top